Calix is pleased to announce the filing of a patent covering a new application of its core technology for the production of zero CO2 emissions iron and steel.

Iron and steel making sits just behind cement and lime as the second largest source of man-made industrial CO2 emissions, estimated at 7% of the global total, or around 2.6 billion tonnes per year.

80 to 85% of the industry’s CO2 footprint is associated with the production of iron, as 90% of all iron is produced by metallurgical coal- and coke-fuelled blast furnaces, producing approximately 1.8 tonnes of CO2 per tonne of iron produced.

Iron produced via direct reduction of iron ore using a “syngas” of hydrogen and carbon monoxide (made from natural gas) in a shaft furnace is a less CO2 intensive method, at around 0.6 tonnes of CO2 per tonne of iron, however this process route has traditionally been more expensive, and hence only 10% of the world’s iron is produced by this method. The method requires cheap natural gas, as well as pelletisation of iron ores to prevent fines loss.

Methods to lower the carbon footprint of iron production have started to consider using “green” hydrogen as the major reductant instead of natural gas and coal. The use of hydrogen in blast furnaces is being tested, but there will be limits on the amount of coal it could replace due to a reduction in the conversion rate of iron ore to iron. A “direct reduction process” with hydrogen is currently being assessed in the HYBRIT process in Sweden with SSAB, Vattenfall and LKAB. However as with a normal direct reduction process, the iron ore requires pelletisation, and ultimately consumes about 72 kg of hydrogen per tonne of steel (Source: McKinsey & Co -Decarbonisation Challenge for Steel, P9).

Following the production of iron, steel is then produced either by removal of impurities in a basic oxygen furnace (usually following a blast furnace) or electric arc furnace (usually following a direct reduction process). Both production routes allow for the recycling of scrap steel at this point. In both routes, impurities in the steel need to be removed, and this is partially achieved via the addition of lime both before and during the steelmaking process, typically between 25kg to 70kg of lime per tonne of steel, or about 46 million to 130 million tonnes of lime. 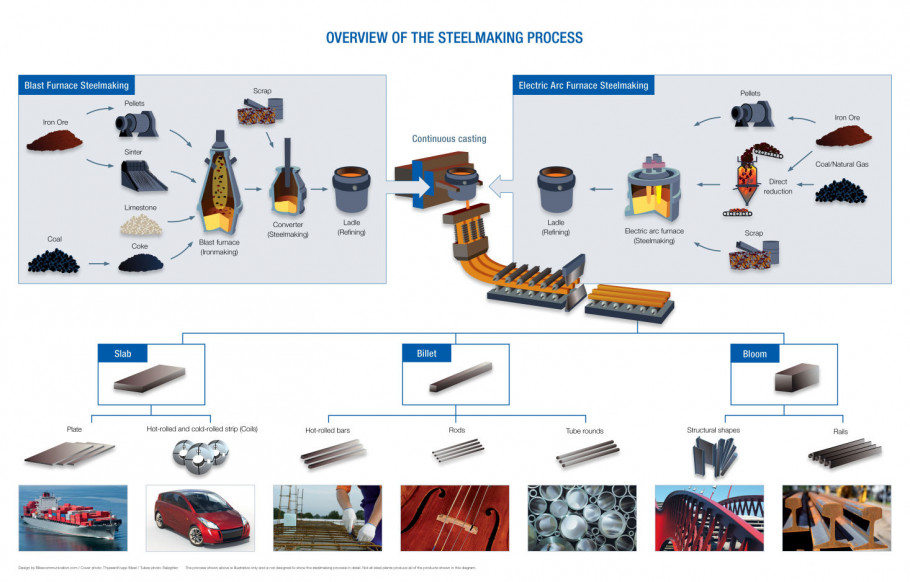 Diagram above is from the European Steel Association

Calix’s “ZESTY” (Zero Emissions Steel TechnologY) Iron process involves the use of Calix’s core “kiln” technology to reduce iron ore to iron in a hydrogen atmosphere at between 600oC to 800oC, about 1000oC lower than a conventional blast furnace, due to the ability of Calix’s technology to handle small particle sizes in a controlled atmosphere. Calix’s kiln can also be easily electrically heated and handle intermittent operation – and thus the process can be energised via renewable energy sources. Because expensive hydrogen is not consumed as a fuel, and only as a reductant, Calix’s process is targeting the theoretical minimum hydrogen use of 54 kg per tonne of iron. 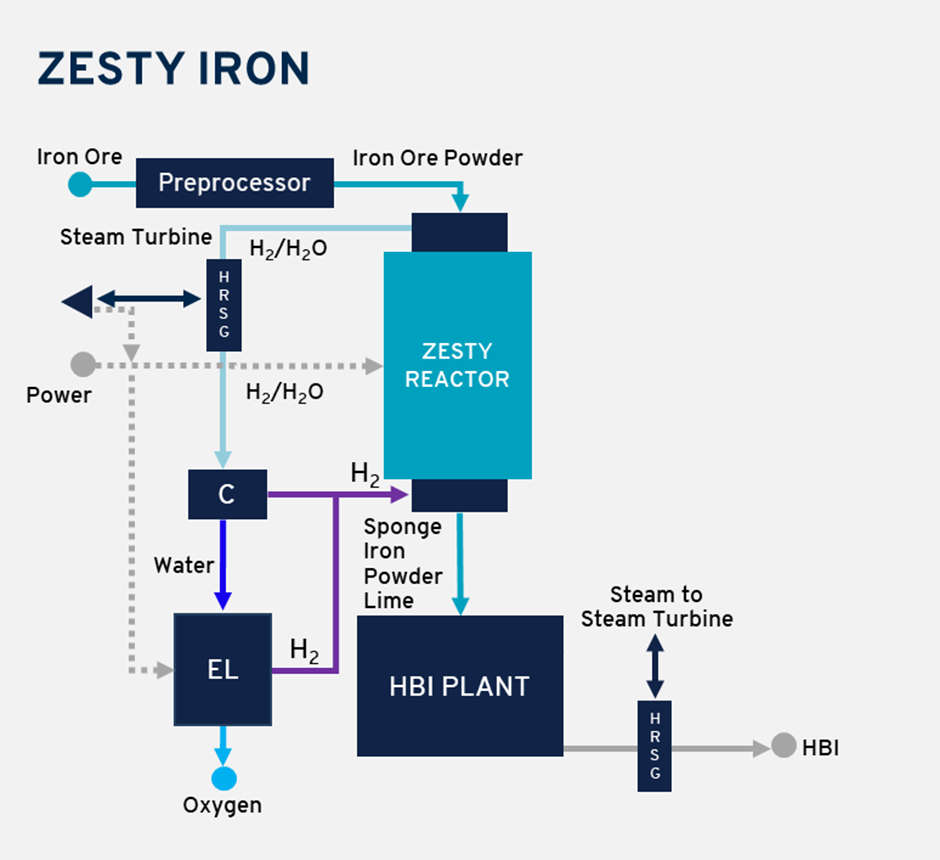 Calix’s “ZESTY” (Zero Emissions Steel TechnologY) Steel process involves the use of the ZESTY Iron process feeding a standard (continuous) electric arc furnace (C-EAF), with the addition of a LEILAC kiln to produce zero-emissions lime. The “hot, active” lime produced from the LEILAC technology can be directly fed to the ZESTY reactor, and in addition any extra CO2 required in the C-EAF for the final steel mix can be fed directly from the LEILAC reactor. Some extra lime from the LEILAC reactor can also be used to scrub any excess carbon dioxide, as well as other pollutants such as sulphur compounds, from the exhaust gas from the C-EAF in a carbonation step (“CL” in the diagram). In addition to the advantages of Calix’s ZESTY Iron process, Calix’s ZESTY Steel technology allows for: 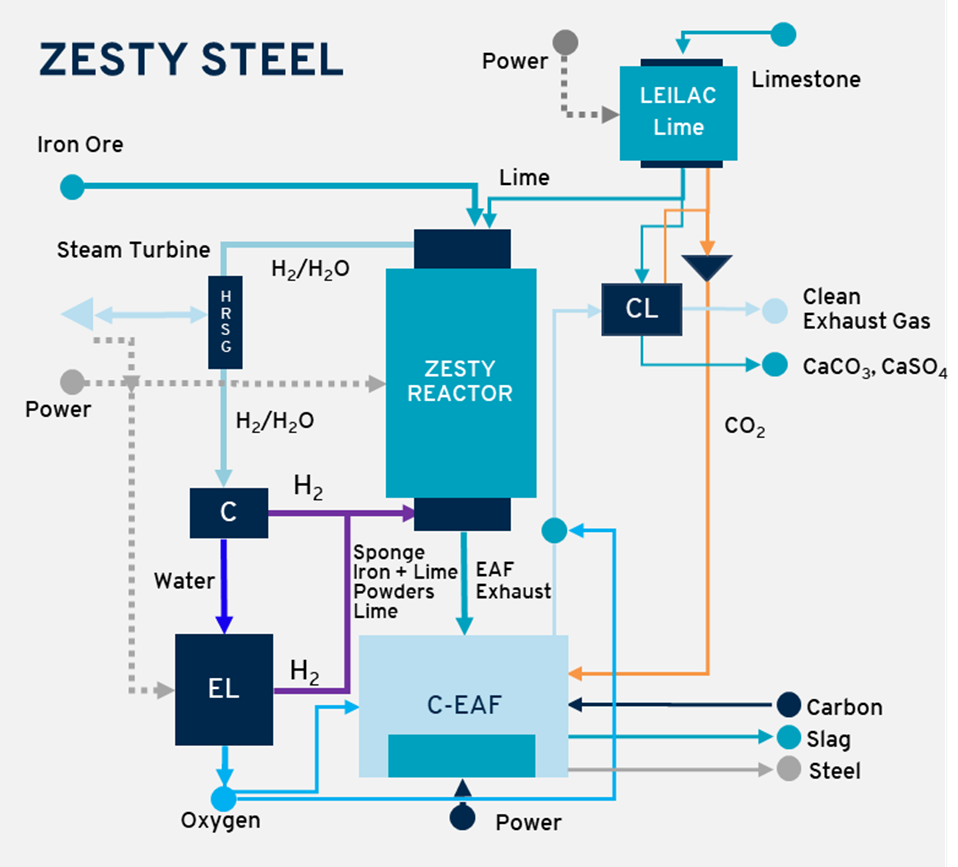 Professor Paul Fennell – Professor of Clean Energy at Imperial College London said “The Fennell group at Imperial College is currently conducting its own independent investigation of the use of powder gas reactors, such as that embodied by ZESTY for iron and steel production and have found no substantial obstacles so far in our studies. We believe that tight control of particle size to prevent internal diffusion limitation will be necessary, and there will no doubt be other phenomena to be considered as the technology is scaled. However, the production of iron from iron ore is clearly the most obvious next generation use of the Calix technology, and one that I consider to have great potential”.

Calix’s patent outlines the use of Calix’s core technology to produce zero emissions iron and steel. The technology will need to be scaled and tested, and the patent upheld, to achieve commercial success. Initial testing is taking place at Imperial College in London. If positive results are confirmed, Calix will then conduct scale-up testing at the Company’s Bacchus Marsh facility with ores from a potential customer, who Calix has already engaged in discussions. 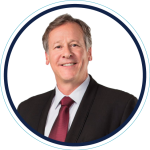 CEO of Calix Phil Hodgson said: “These are early days for the Calix ZESTY technology, however, given the materiality of both the potential for our technology in iron and steel production and the size of the environmental challenge, being similar to the one our LEILAC business is addressing, we will be pursuing this opportunity as quickly as possible – the world cannot wait any longer.” 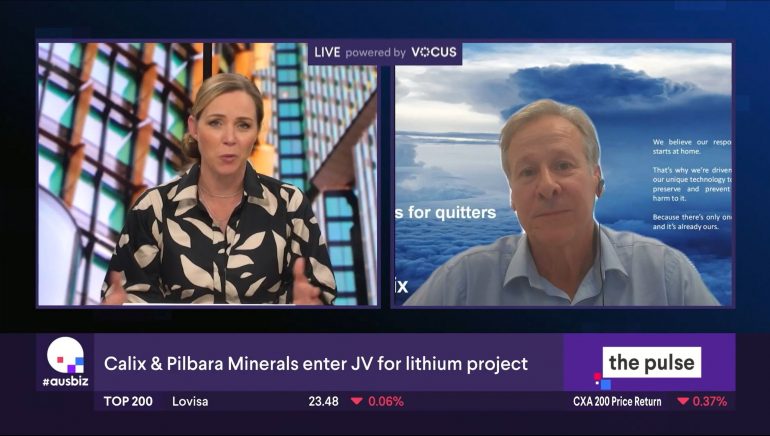 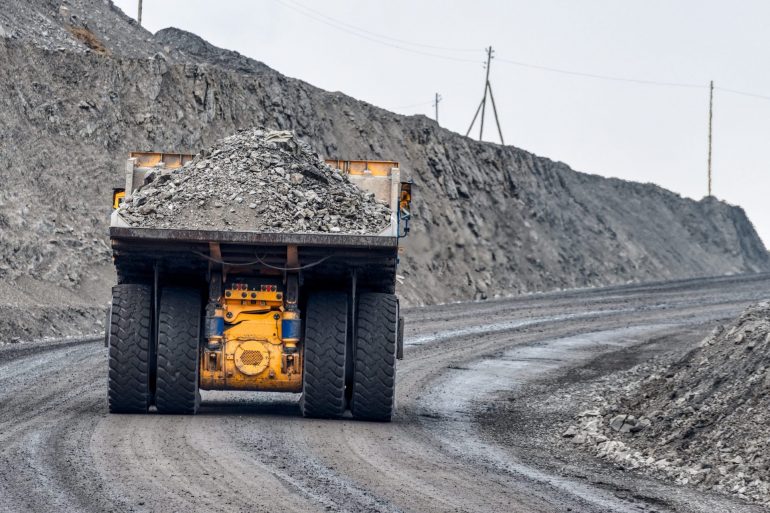 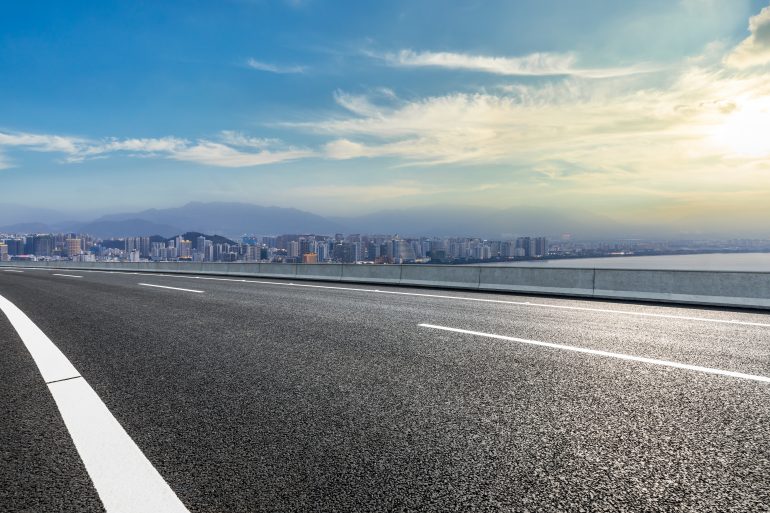